Tuesday morning we awoke to news of blockades all over the city, and my heart sank. Was our first camp going to be postponed indefinitely? All the gear lay in the back of the truck, ready to transport to Fundacion Emanuel in the red light district, and our volunteers arrived at the apartment one by one, ready to start the camp season with a four day camp in Toro Toro National Park. I sat at my computer, refreshing the browser on the newspaper website, while the latest reports from the TV rumored that police were forcibly lifting the blockades. Could we get through? We decided to at least make an attempt.

*Note: attempting to get through blockades can result in broken windows and slashed tires, and beating the driver.

We piled into the truck and made our way along back roads toward the Foundation, only to find that the way in was thoroughly blocked. I got out and tried to convince the protesters to let us through. Sometimes this works, especially if you have the logo of a foundation emblazoned on the vehicle. But there was no success today. Tracing more back roads we got within a block of the Foundation and carried in the gear piece by piece. All of our campers were ready to go, and after distributing the gear and setting goals, we were ready for departure! We hoisted packs and trekked a mile through the city to where our trufi sat waiting, only to hear that the route out of town had been freshly blockaded as well. With some encouragement, our driver agreed to seek out an escape from the city crawling up precariously steep roads, with most of the passengers running ahead to lighten the load. An hour later we found ourselves on the open road, bound for Toro Toro. 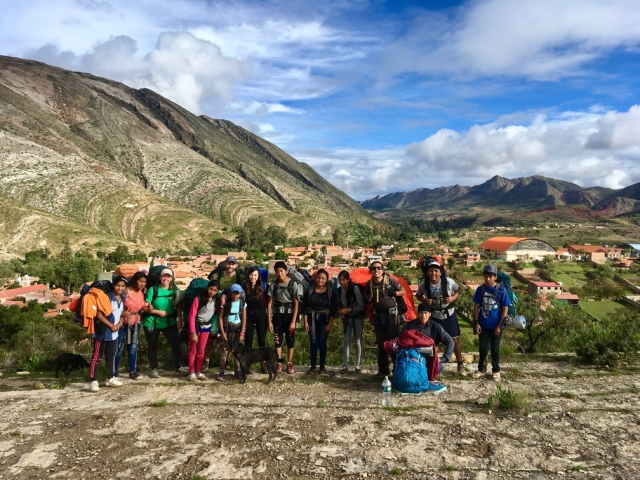 From this point on, I couldn’t have asked for a better start to the camp season. The weather was absolutely perfect: hot when we wanted to go swimming, sunny when we needed to pack up or set up camp, dry enough (despite rainy season) to explore caves and cross rivers that tend to become impassable in the rain, and rainy when we needed to hike long distances across the desert, making it cooler and less tiresome. Rarely is this the case, and I simply cannot overlook this blessing, especially when my primary goal was to stretch the endurance of this group while backpacking. Cooperative weather reduced the latent difficulty of the camp and kept spirits high, allowing us to focus on individual challenges, group activities, appropriate handling of gear, and times for reflection and processing.

I am proud of the progress these kids have made. This is just their third camp, and already they have developed a reliable independence in handling the tents, packs, and cooking equipment. Many of the girls from Fundacion Emanuel are in charge of cooking for their families at home, and so the new challenge of miniaturizing the experience is a fun one for them. The boys have also learned how to prepare an edible meal, to the degree that the low point for almost every camper was the lack of salt for cooking!

Alejandra braces against the cold water of El Chiflon waterfall

The high point varied among our campers, ranging from exploring the caves to swimming in the canyon, but the dominant response was rappelling at the waterfall. This is a huge leap in overcoming fears for this group, as most of them were absolutely terrified the first time we did it a year ago. With some experience under their belts, Alejandra was the first one down the rope getting soaked by the cascade of cold water, while Jhair intentionally subjected himself to the dread of descending the dry route. As I received each one at the bottom of the rope and helped them unclip, they all said they loved it!

I have noted a big increase in their overall maturity this year, both in the way they all handle challenges, and in their ability to voice their thoughts during debriefs. I have been anxious to apply the new strategies I learned for facilitating more active times of processing and reflection during the past few months, and we put them to the test in this camp. I am happy to report that adding an element of play certainly helped our campers to open up and relax, and the groans and evasion that oftentimes accompanied the call to gather for a chat have vanished. On day one everyone answered their questions with hesitant and shy responses, but by day three kids were volunteering thoughts even without the aid of a game or prompting.

My favorite moment during this camp came on the last night as we gathered to reflect on the day under a dark sky bursting with stars. The boys threw themselves on the damp grass (and sheep droppings) and gazed up at the night sky, amazed by the display they cannot see living so close to the center of Cochabamba. Mauricio asked to play with the debriefing ball, leading to an impromptu game of soccer on the pasture where we were camped. Laughs and shouts filled the night as headlamps bobbed in the darkness, swarming around the tiny ball and dropping to the ground as players tackled and tripped each other in the frenzy. It was a spectacular time of bonding among the older and younger campers, and our volunteer leaders as well. 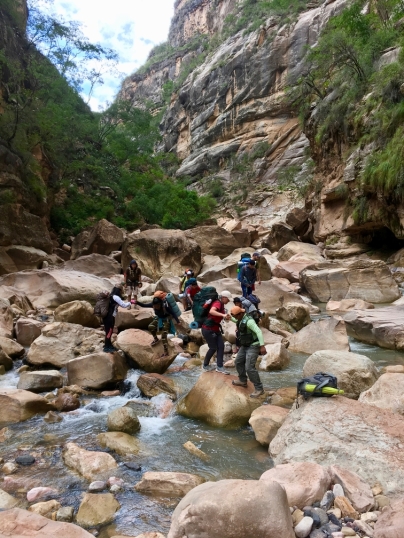 Headlamp soccer was also great evidence that the long hikes we undertook during this camp were not too much for their ability, despite the whining and foot dragging that took place at the end of day two. To be fair, covering ten kilometers with a full pack, descending into a canyon and crawling back out of it by a goat trail is tough and tiresome for most people, especially when the pack weighs as much as you do. But on day three the kids adjusted to the challenge and were impressed with their own improvement, marveling at how fast they covered the distance between the caverns and the town. They know that their hard work and determination in this camp opens doors to more adventures in and around Cochabamba, and as we parted ways Friday evening they pestered me for the dates of their next outing.

The success of this camp came thanks in large degree to our volunteer leaders. Without them the task of caring for, encouraging and setting the kids up for success is much more difficult, not to mention the logistical preparation that goes into each camp. As a foundation we have been blessed by a growing number of young people who are anxious to serve as leaders in our camps, and we organized a workshop last weekend to train them in everything from wilderness first aid to group management and decision-making. Ten young men and women gathered at our apartment, representing different organizations that we have worked with over the years, and bringing different perspectives on camps, leadership, and life. We formed strategies for how to react in a variety of dilemmas that have surfaced in camps, competed to pitch and pack the tents properly, and explored new ways of guiding group discussions using games. I am excited to see our group of volunteers grow and mature, and continue to pray for local leaders who can take the reins of our mission and make it thrive in Bolivia for years to come.