I just realized I never posted on our camp experience from July 2013, which is a shame, because it was awesome.  Now to correct that oversight.  Bear with me as I walk you through this year’s camp.  Every detail, at least for me, was fascinating and hilarious.

Our therapy goal for the two weeks of winter camps for this year was what psychologists call “internal locus of control”, or the ability to accept responsibility for events or circumstances in your life, in particular your responses to them.  People who have experienced trauma of some kind (especially abuse) often have a very external locus of control, meaning they cease to see their own power as individuals and place all the power in outside persons or circumstances.  The result is a person who feels powerless to act when faced with difficult situations, or unable to meet their own needs.  This is a truly debilitating frame of reference that can defeat any individual if not corrected.

This year we broke the boys into groups of 5, as we often do, but this time we specifically grouped together boys of differing abilities.  In any other circumstance this would cause the boys to become disillusioned and problematic, but in this carefully crafted scenario, it became simply one more challenge to overcome and allowed stronger individuals to take the lead while simultaneously being forced to encourage and care for their weaker companions, if they were to beat the competition.  The entire camp was to be a contest. 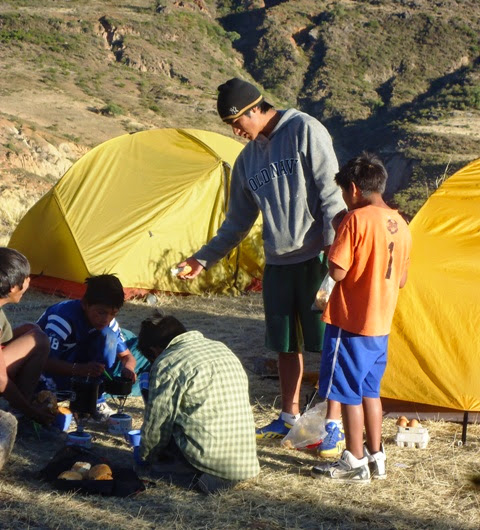 Nothing sparks our guys’ enthusiasm more than a well-regulated competition!  The boys in this adventure therapy program are by now quite used to me calling the shots.  I decide where we are going, what we will be doing, how we will do it, for how long, etc.  Not this time.  This time just about everything was decided by the groups themselves.  The only parameters I set for them were our designated campsite, and to get their whole team there by nightfall or face severe consequences.  This strategy forced the boys to make their own decisions, and then to face the consequences of those decisions.  No bail outs.  Hungry?  Your problem.  Don’t think your leader is taking the best route?  Figure it out.

While this scenario caused me perhaps more anxiety than usual because I was no longer in control, it was fascinating to observe how the boys acted in each situation.  It was also hilariously entertaining to see the frustration on their faces when they would turn to me to ask for instructions or advice, and be met with nothing more than a smile and shrugged shoulders.

Ariel makes breakfast for his group

We started with logistics.  Each group had to designate a representative to accompany me to the market to buy their group’s rations for the camp.  Most groups agreed loosely on what to buy before sending their representative, but some simply entrusted their man to buy what seemed best.  Some came with written priorities: “definitely get marshmallows and Maruchan cup-o-soup; if there’s enough left over buy bread and stuff.” Awesome.  The market scene was hilarious.  10 boys wandering around pushing carts, going up and down each aisle seeking out their specified products, and observing the incredible variety of options.  Each leader had 300 bolivianos ($43) to feed their group.  Once a good hour had passed, we gathered at the registers and began the painful process of finding out which groups came in at budget, and which ones had to go put items back.  It was very interesting to see which items got the ax!  Even the cashiers were amused by the scene, as young teenagers were faced with reality and had to make difficult choices.  The group who came in with the lowest bill won the market competition, one of 18 different categories for the whole camp.

We had a team visiting from National Community Church, in support of this adventure therapy program, and they soon found themselves subjected to the decisions being made by the boys.  We paired up two NCCers with each group, in part to help me keep track of the groups, but I gave them specific instructions NOT to lead the groups, or even really make suggestions of any kind.  Only when a decision seemed life threatening were they to intervene.  One pair were particularly dismayed to see the rations their group had bought: one loaf of bread, a few cans of sardines, and not much else.  These guys had won the market competition, and now were going to suffer the consequence for winning. 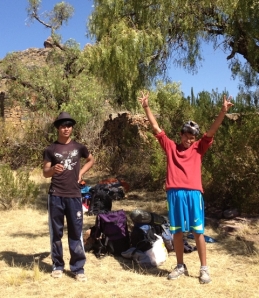 The time came for us to set out.  We clambered off the bus, I hit the stopwatch, and said “go”.  A couple of the groups kind of stared at me blankly, waiting for me to indicate which route they should take up the mountain.  Two other groups were already practically running up the steep trail toward camp.  Another two were taking a more scenic route up an alternate trail on the other side of the valley, making the conscious decision to forgo the “first to camp” competition in order to focus on accumulating points in other areas.  One group decided to hike straight up the ravine.  Troopers all.  I ran around the mountain doing my best to observe each group for a time, and to document their escapade (see the link to July 2013 in the media gallery).

Nearly everyone collapsed upon reaching camp.  Nelson and Brian went to go look for water, and came back with a good number of scrapes and cuts from their tumble down to the ravine.  They had decided specifically not to carry much water from home, and were now experiencing the outcome of that decision.  After the boys made lunch for themselves and their NCCers, we began the tent pitching competition.  Boys were judged on speed and quality, each being a separate competition.  Each team had three tents to pitch, and we clocked them individually.  The boys stood holding the bag, awaiting the timer.  “Go!”  The tent flew out of the bag, poles crashing to one side as the tent hit the ground and the bag flung aside.  Groundcloth out.  Tent spread out.  Poles in.  Poles out.  Poles back in the right way.  A good bit of yelling.  Tent up.  Fly on.  Fly adjusted.  Tent staked down, and…TIME.  Once every member of the team finished working and yelled time, I hit the stopwatch. 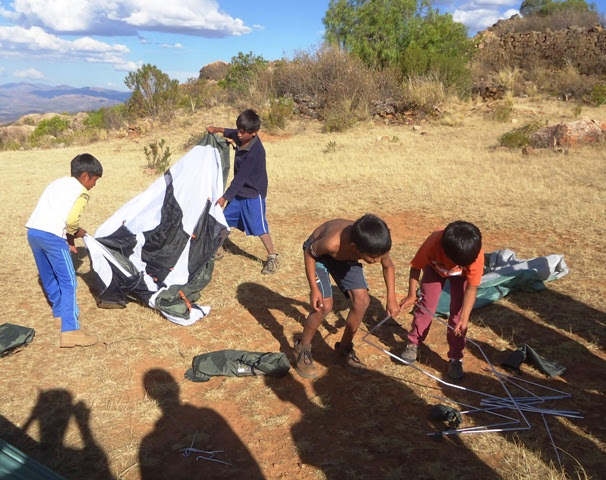 We let each group pitch all their tents before going through as a group and evaluating the quality of the job.  Missing a stake here.  Fly’s on backwards.  Groundcloth is showing and rainwater will pool underneath you.  Where’s the bag?  Where does that need to be?  Right, inside the tent.  Missed a hook here.  The looks of despair on some boys’ faces as they realized how minute the inspection was going to be were entertaining.  Some tried to sneak away and correct their tents before we got there but were spotted and called out.  It was interesting to see that in general, quality was not sacrificed for speed.  A group either knew how to pitch a tent or didn’t, and either worked together to get it done fast, or flailed about for nearly ten minutes and in the end put forth a sorry product.  In some cases a group pitched their tent in a very egalitarian way, while in others a leader emerged, barking orders.

Still to be tested were the campfires. Groups were going both for duration of fire and speed with which it fully ignited.  Some groups spent the better part of the afternoon gathering firewood, amassing a huge pile of fuel, while others put in little effort, and got what they expected: a 5-minute fire.  One group, in an effort to win the speed competition, brought a plastic bottle full of gasoline from the mechanic shed and doused their fire with it.  I decided to let the trick pass; I hadn’t told them they couldn’t, right?  How could you cheat if there were no rules? Their fire obviously lit spontaneously, but failed to ignite the wood they had gathered because, trusting in their fuel, they had built their fire rather poorly.  They ended up losing the fire competition completely.  In the end we decided to light each of the medium sized fires one by one, letting them burn out before starting the next one, and thereby enjoying a good campfire for the better part of the night.

The remaining days of camp were spent traipsing about the hillside checking off competitions.  Each group was given a checklist of recommended activities, but had the option of choosing which ones to participate in.  There was a photo scavenger hunt featuring huts, volcanoes, wildlife and others.  Groups were graded on level of teamwork both within their own group, and in connection with other groups.  Groups lost points for abandoning team members, being discouraging or unsafe.

One of my favorite elements of camp were the “random first aid situations.”  Before setting out, I gave the NCCers in each group two note-cards with a first-aid situation to pull out at random, one per day, and to record the group’s solution.  All groups received the same situations and we graded their creativity and effectiveness in solving them.  Now, I have trained all of our guys in wilderness first aid, covering all the situations that are most likely to occur in our region: from hypothermia to dehydration, how to splint a broken bone and what to do in the case of a snake bite or bad water.  It was interesting to find which boys had been paying attention in the training.  One group came up with a really effective splint for their “broken arm after a bad fall”, actually ripping a t-shirt to form strips of cloth with which to tie small branches to Alex’s “broken” arm.  This contrasted with leaving Michael to die in the sun after experiencing “dry, hot, red skin, sticky tongue, lack of energy and mild delirium.”  Of course, this may not have demonstrated that group’s level of first aid knowledge; anyone might have done the same with certain team members. 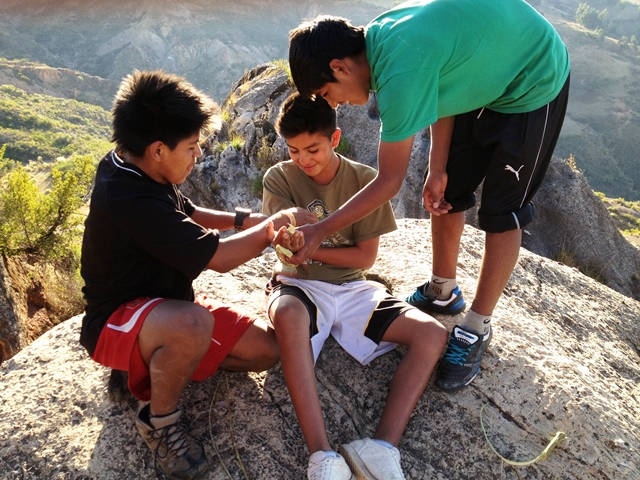 The camp was a raving success by anyone’s standards.  Boys and NCCers alike had a great time.  Some boys, like Carlos, discovered they were actually very good leaders, making calculated decisions and watching out for the well-being of their entire group at every stage.  It took them a while to adjust, but the boys learned to make their own decisions, to enjoy that freedom, and then to simply face up to the consequences, even becoming jubilant and enthusiastic in the face of self-induced hardship.  Even now, a year later, the experiences from this camp serve to help the boys make the connection with difficulties they are facing now, to own the problem, to change what they can, and to patiently and positively endure what they cannot.